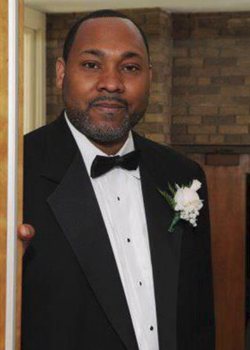 Mr. White is a native of Gary, Indiana and the youngest of three children. Larry is married to Rebecca Blasingame-White an Administrator for the State of Maryland Public School system. Mr. White spent 12 years on active duty with the U.S. Navy receiving numerous Navy Achievement Medals and Good Conduct awards. In the Navy is where Mr. White learned how to become a Team Player, Mentor, and Entrepreneur. Larry was a very intricate volunteer while on active duty earning Volunteer of Year at Sherwood Forest Elementary School in the city of Norfolk.

Mr. White has appeared on various local television programs, and radio stations speaking on Leadership, Mentoring and Entrepreneurship. Mr. White has the opportunity of working with Ambassador Shabazz, Dr. Ben Carson, A’Ngela Winbush, Charlie Wilson, Marla Gibbs, and Jennifer Holliday. As CEO of VIPeVENTS Concierge, he recently spearheaded an event to
provide toy’s for disadvantage youth in the Baltimore metropolitan area. The event was supported by such individuals as the Mayor of Baltimore, and Attorney General Douglass F. Gansler. Mr. White has been the recipient of a numerous awards including the 2012 NAACP’S President’s award, and the 2014 Dr. Martin Luther King,