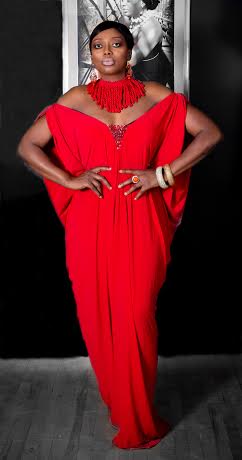 The Fabulous Fashion Designer Uche Ibezue is ready to support the Miss Africa USA 10th Anniversary in a big way.  As well as serving as a Judge in the Preliminary rounds on Thursday August 27 and Friday August 28th, Ms Uche is embracing the Pageant with her successful Fashion Brand, Omak Designs.  She will dressing up the Out going Queen and the Host of the Grand Ceremony and has promised to be one of the Official Designers for the Queen during her reign as Miss Africa USA.

Get to Know Ms Uche Herself:

The luminous, prolific and polarizing fashion creator Uche Ibezue, born in Nigeria conveys an embodiment of panache, grandeur and refinement with a regal point of view in the fashion industry. This bravura beauty has design aesthetics that are deliberated and realized in her styling of both national and international dignitaries, celebrities and pageant queens through her jewelry and clothing apparel. Uche is the well-grounded, spiritual soul that is the contemporary couture designer of O’makdesigns, a U.S. based fashion brand. Ibezue’s lifelong determination, ambition and energy are applied to the label O’makdesigns that was inspired by her mother’s eccentric style of dressmaking and Afro-centric styling influences.

Ibezue credits her mother’s humble innovative & vivid visionary approaches to trend setting, as the drumbeats to her “passion for fashion”. From the day Uche witnessed her mother using an old tablecloth to create a costumed

dress, she became infectiously enthusiastic toward fashion and her creativity ignited – knowing NO bounds. Ibezue began training in fashion at the school of Arts & Design College of Technology specializing in fashion design in Lagos, Nigeria. Later, she further fine-tuned her craft at Penfoster College and Baltimore City Community College. Thereby, catapulting O’makdesigns originality to another dimension of high fashion with each original inspired garment from beginning-to-end.

Uche Ibezue debuted O’makdesigns in the summer of 2010, with the grand opening of the first flagship store at the historic Savage Mill Mall in Laurel, Maryland. Her creative O’makdesigns’ has been prominently featured in high fashion runway shows across the globe, from New York – to – London – to Africa. Likewise, she has been in many media publications including the World Best of Baltimore, Howard Magazine, The Diasporan Star, Slantress Magazine, This Day magazine and countless local, national & international Africa print outlets. Recently, being acknowledged as the first African designer to grace the cover of Howard Magazine. In 2013, Uche has been nominated for numerous award nominations, which includes Fashion Awards MD for the Fashion Awards category, was acknowledged by Slantress Magazine Inspire Award as a Fashion Forward designer and was the official designer for the Miss Africa USA 2013 pageant. Uche continues to bridge fashion-to-celebrate-to-empowerment to all women regardless of their ethnicity with her timeless and eccentric originality.

ALPHADI: Father of African Fashion, Prince of The Desert, Confirmed On The Panel Of Celebrity Judges Of Miss Africa USA Pageant 2015